Reproducing the properties of observed galaxy cluster mergers is an essential task for numerical simulations. This is especially the case if quality data exists in a number of wavebands. Reproducing specific mergers aids in the interpretation of observed data and helps to constrain models for the underlying physics of the cluster galaxies, gas, and dark matter. 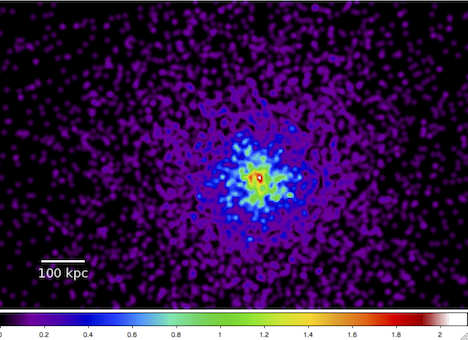 In this vein, I performed simulations of the cluster Cl0024+17, which is believed to be a high-velocity merger of two clusters that is occuring along the line of sight. This interpretation is supported by optical (Czoske et al 2002) and X-ray (Ota et al 2004) data.

Using these profiles and the temperature profile of the system, we showed that (in accordance with observations) the estimated hydrostatic mass of the system is accurately determined (to within ~20%) by assuming the existence of these two components, which is also in accordance with the existing X-ray observations and the weak lensing mass reconstrction of Jee et al 2007.

Figure 3: A dark matter ring forming in a cluster merger collision where the particles have initially mostly tangential velocities.